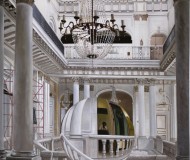 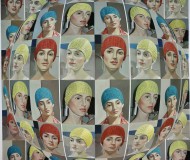 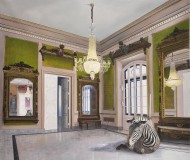 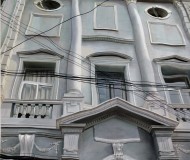 The art of Marcus Rose combines realism of expression with distortion and compositional elements that fundamentally re-interpret the urban landscape.

Marcus was born into an arts inspired family and worked from an early age. Later study in Australia and France refined his vision. Working and travelling extensively, Marcus’ work reflects international themes. Buildings of a diverse character and from a variety of timelines are scattered through Marcus’ body of work.

Marcus’ work is composed often with a self conscious referral to photographic montage. Straight line cuts of image, together with aspherical distortion are re-created on canvas in a high realistic style. This produces distortion similar to that produced as if viewing the subject as a reflection in a curved mirror. Marcus explains that this effect is inspired by the work of Victor Vasarely (Vásárhelyi Győző) (9 April 1906[1], Pécs – 15 March 1997, Paris) a Hungarian French artist whose work is generally seen aligned with Op-art. Marcus says: “The distortion of the real world as if through a looking glass inspires the viewer to see reality as artifice. The world as we know it is a representation to our senses, just one representation.

“Having been raised by a French/Russian artist mother who painted in the impressionist style I was from a young age inspired by the traditions of both abstraction and impressionism. This led me towards my love of pure colour and painting in general. The play of light and shade as well as the dissolving of solid immutable buildings, my subjective interpretation of the world around me, was powerfully inspired by my early childhood experiences”. Marcus works principally in oil on linen canvas. He works both alone and with studio assistants.