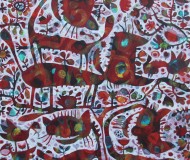 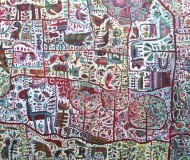 Down in the Park

Gus’ detailed, colourful and poetic works encapsulate his love of nature, animals and life in the country, where he spent most of his childhood. His seemingly simplistic figures exist in complex worlds and narratives where the whimsical stories that play out on canvas represent complex maps from the Atlas of Gus’ imagination. The carefully crafted and resolved detail create colourful journeys through a world of observation and playful insight which leaves the viewer with fulfilment and intrigue, where a new day or mood can allow different story lines to unfold.

Gus’ professional career as an artist launched in 2009 with a sell out show at Art Sydney, followed by yearly successes in his solo exhibitions at Libby Edward’s gallery in Melbourne, and recently a successful showing at the Design Files showcase. Gus is regularly approached for commissions small and large.

In 2004, Gus spent time in the small aboriginal community, Lockhart River at the very northern tip of Cape York Peninsula. Spending time in the Arts Centre alongside local Aboriginal artists was a major turning point in his approach and enjoyment of his art, which still influences his work today.