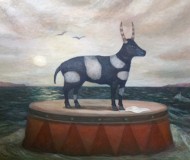 After graduating from RMIT in 1972 and winning The Myer Award for Illustration, Dayle Bolton worked as a freelance illustrator for major national and International retailers and magazines. Notably in London in the 1970’s her illustrations in Vogue featured as full-page advertisements in the press, many of which were later sold as limited edition prints. Back in Australia the artist was selected as a finalist in the Alice Bale Portraiture Prize in 1992.  Bolton’s work embodies the maturity of her experience in alternate design fields. These theatrically composed works transport the viewer on a journey to explore the profane, and to witness a mythology they have uniquely created. Probing and haunting they engage us vicariously in their dual theatrical experience of life. Intriguingly they tempt us with their wisdom. (Amanda Walsh Ph.D Melbourne University) Bolton has exhibited exclusively with Libby Edwards Galleries since 2004.